Holding up a gender equality lens to international development issues is not a recent addition to the Catalystas toolkit. On the contrary; Catalysta An Vranckx set up her first large-scale, in-field, gender-specific capacity building program at the turn of the century.

Catalysta An, center, with community leaders assembled in Cali, 2004

In the wake of commitments made by various EU countries at a May 2001 donor conference to support peace-building efforts in Colombia, An reached out to smaller actors on the ground in Colombia’s overheated rural zones, offering help to tap into the donations that EU countries had designated.

As of 2003, she effectively secured funding from the Kingdom of Belgium’s ‘political’ budget line on peace-building, which allowed the Colombian Corporacion Ecomujer to design, develop, and expand a capacity building program to assist (‘acompagnamiento’) women’s groups in conflict-affected hotspots in three Pacific Colombian departments (Nariño, Cauca, and Choco).

Known as the Cartogafia de la Esperanza, this program began mapping the initiatives that women were undertaking in zones marred by several types of armed actors (both guerrilla and paramilitary militias, as well as State actors) engaged either in massacres or in best efforts to prevent them. These women’s ‘iniciativas ciudadanas’ were seen to make them more resilient in resisting the dynamics of violence-for-vengeance, which caused so many others to flee these zones. The initiatives gave them an option to stay in the zone, rather than joining the large number of Internally Displaced People (IDPs) in these departments’ larger towns as well as in and around the Capital.

That the Cartografia worked quite exclusively with women’s group was no accident, nor was it a consequence of deliberately excluding men from participating. The conflict-ridden zones where the program operated were, simply, voided from adult men. This was not because massive numbers of local men had joined armed groups and were hiding in clandestinity. Rather, it was due to the economic fallout of the conflict, whereby armed actors preyed on what little economic activity was still being conducted in these zones. Thus, crops and shops were systematically plundered, transports of goods were systematically stopped and attacked, and people travelling by road stood a high risk of getting kidnapped for ransom. As this situation made it impossible to continue supporting a family, many men opted to leave the zones and try to generate income elsewhere, leaving their spouses and children behind with a promise to send money home. Such promises rarely being met, women were left searching for ways to overcome their most pressing problem – poverty – while at the same time taking on a new role in their households and communities in the absence of the male heads of the households and community leaders.

An coordinated the Cartografia with the Ecomujuer team, employing sociologists and anthropologists from Colombian universities.

She designed some of the tools – including a board game – to help capture and contextualize the citizens’ initiatives. This data informed a longitudinal analysis of the demographic, gendered state of affairs in Cauca, Nariño, and Choco.

This comprehensive and in-depth description and analysis proved key to understanding the organizational processes on the ground in Colombia’s most dangerous regions. It served to connect deeply with the women involved in these processes, and tailor capacity building trajectories that met their needs. This assistance was offered in a variety of ways.

These exchanges, in turn, prompted the Cartografía to take a more explicit legal turn in the second phase. Regional workshops were organized where community leaders were instructed on how to take action (such as through a legal figure locally known as a ‘tutela’), to request that the State safeguard their specific (security) needs, and to take appropriate protective action.

In yet a later phase, the Cartografia began training female leaders from these war zones to perform community services as peace judges (under local law, derecho comunitario), and defenders of equality. In the course of these efforts, the need for a gendered lens on judicial work became manifest. The contributions made by the project were later recognized by the Colombian State as highly valuable for the training of all judges imparting local law, male and female. Thus, the program was included to feed into the State-wide training of local judges.

These and several other findings and program developments are described in Cartografía de la Esperanza – Iniciativas de resistencia pacífica desde las mujeres. The book was launched in Bogotá in 2006, for an audience of the country’s prominent female leaders and feminists.

An’s Cartografia years alongside the wise women of Ecomujer provided a deep initiation into ‘Real World’ work regarding gender, that she has elaborated on further in her career, both in Colombia and elsewhere. She holds these women in the highest regard, and does not hesitate to qualify them among her ‘mothers,’ in both the formation of her passions for human rights and equality, and in the development of her professional career.

Liaised between donors on the European side, and grassroots organisations on the Colombian side – all the way through accounting and reporting phases 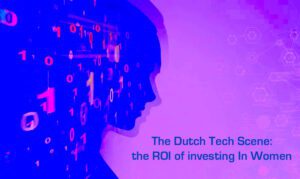 The Dutch Tech Scene: the ROI of investing In Women